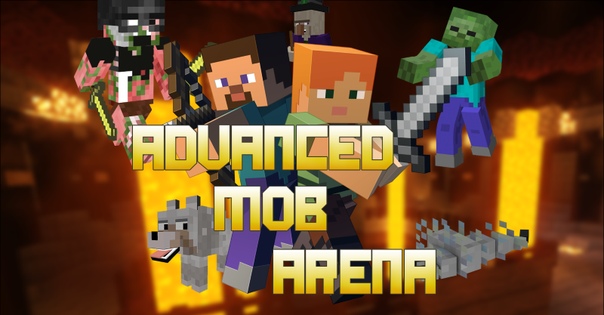 AdvancedMobArena allows you to create amazing and funny mob arenas on your server! Every arena has a lot of settings and features, that makes every arena really unique. You can create kits for arenas, custom mobs and bosses, in-game shops, dynamic areas, loot chests and a lot more!

Arena Features
Arena Lobby
Before the game starts, all players are went to a lobby, where they can select or purchase kits, view their stats, wait other players, and preparing to the game.

Each arena has configurable lobby time.
Arena Auto Open/Close Schedulers
Create auto-events with your arenas! For each arena you can set open/close times, when they will be (un)available to play.

Arena Currency
With AdvancedMobArena, you can use multiple currencies at the same time:
Each currency has it's own config file and can be disabled completely.
(Note: You must have at least one currency enabled for the plugin to work)

Arena Gameplay Features
Arena Chat
Let players on arena to communicate with each other without affecting the server chat!

Arena Custom Mobs
Create your own mob variants of the same mob types.
You can even use passive mobs! They will target and attack players!

You can use MythicMobs instead!
Custom Mob Features:

You can also send custom message to a player, and even execute custom commands!

There is also an option to set a kill streak decay.

Arena Waves:
Create custom waves with unlimited amount of mobs in each, and spawn them in certain arena regions!

Each arena has configurable options for:
Gradual Spawn Feature:

Arena Wave Amplificators
For each arena wave, there is a special section for amplificators.
Amplficators allows you to increase amount of spawned mobs and mobs levels on certain arena events.

Arena Shop
Let your players to upgrade their equipment during the game by pruchasing new armor and items in the arena shop for coins earned for killing mobs!

You can make it so that certain shop product(s) will be (un)available only on certain events, which brings a bit more dynamics into the game!
Shop & Product Features:
Product Lock/Unlock Examples:

Arena Spots
Bring even more dynamics into the game with arena spots!
Spots are small places, groups of blocks, that can be changed on certain game events.
Examples:

Arena Kits
Create unlimited amount of predefined sets of custom armors and items for your players to fight against mobs with!

You can disable kits for each arena individually, making players to use their own equipment.
Kit Features:

Arena Stats:
There are also a Stats System! Track player stats and display the best results via Signs or Holograms!