Premium MC Plugin HideAndSeek 6.5
The ultimate hide and seek plugin, best one you will ever see. 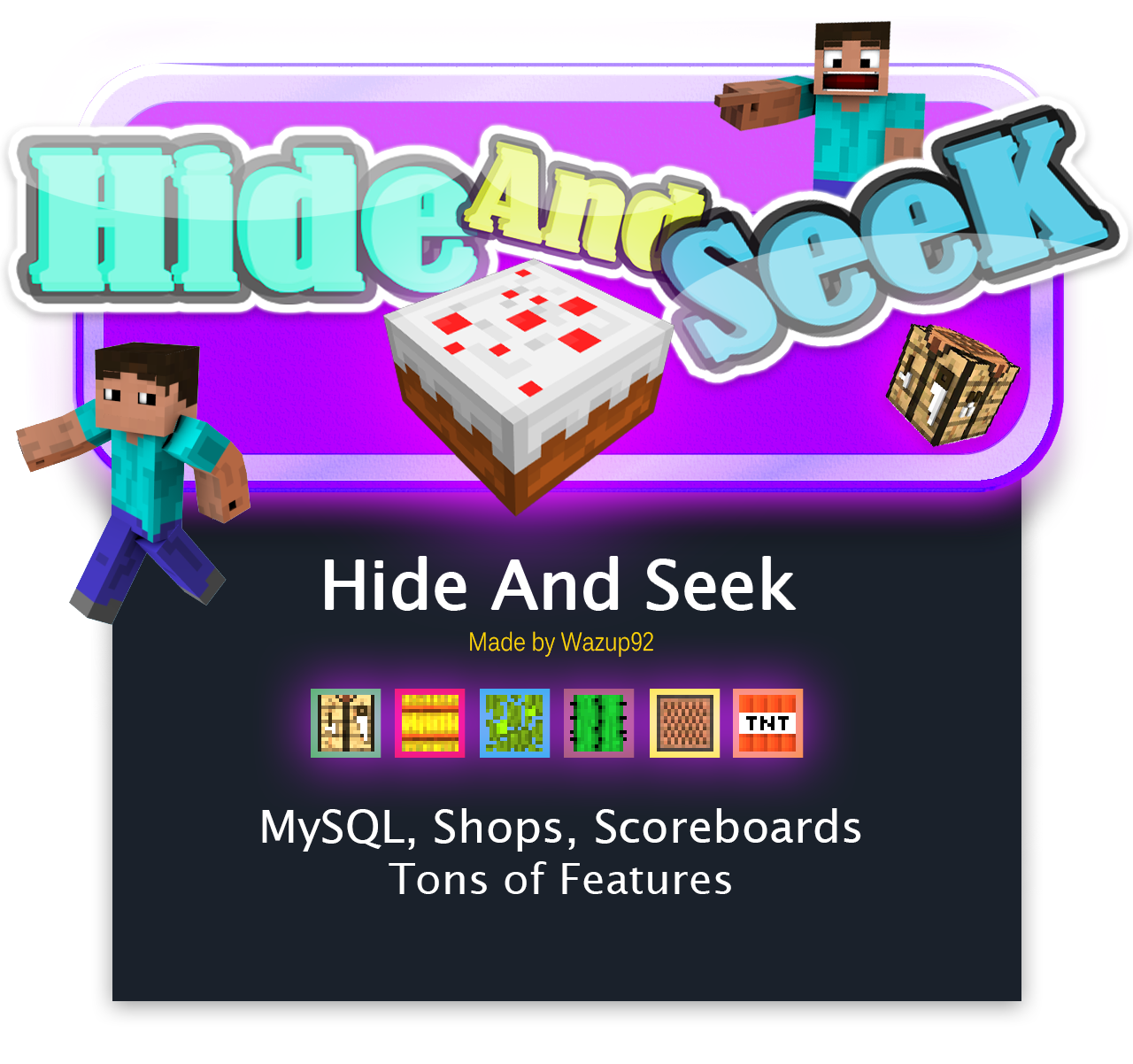 Welcome to the ultimate minigame, made from scratch by me, hide and seek brings back the old game most of us know, into minecraft, with tons and tons of features, all packed in 1 file

Before purchasing the plugin, please read the following.

​
Create as many arenas as you want
Option for bungeemode which will make the plugin take over the server
Map voting for Bungee mode
Vote power up to 3 votes in BungeeMode
Server restarts after a certain amount of games in Bungee mode
Randomize and limit the amount of maps players can vote for in BungeeMode
Disguise as MOBS or BLOCKS!!!
Control items given to seekers, and items given to hiders
Coins system! (included inside the plugin)
Vault support!
Trails! You can give vips permission to display trails when shooting projectiles
Create your own ranks and set required exp to get them, and set your own custom prizes for each rank
Epic powerups system
Saying goodgame/gg after a game has ended will give players karma
Leader board signs! (Show top players)
Display top players heads
Change coins earned per kill for each team
Fireworks ending
Spectating system that works for 1.8+
Awesome lightweight cooldown system.
Works with Libs Disguises OR IDisguise
Achievements system, you can create your own achievement levels and prizes for each level
Give players a map that tells them Congratulations and even have the option to display an image in the map, such as your server logo
Save many many players stats, such as, wins, hiders killed, seekers killed, gamesplayed, play time, exp, rank, coins
Vips can join full games
You can have a gui that contains all of your arenas, and players can click on any arena to join
Many signs types, join/leave/shop/top/stats/autojoin
Players in the game can only perform commands u specify!
Use UUID or NORMAL NAMES
Works with or without MySQL
Give players coins/exp modifier, and the modifier can be any number you want.
Titles
Create arenas with ease, and edit them on the fly with a simple command
Changeable signs format and colors
Change prefix, scoreboard prefix, scoreboard content, and almost all messages! But there are some stuff not configurable, so don't complain about that, and ask before purchasing
Signs that shows some information about arenas
Option to enable Anti-Seeker-Quit system, basically, if the LAST seeker left the arena, and there are still more hiders than x, it will pick a random hider and set him as a seeker, to prevent arenas from constantly restarting
GUI Shop
Perks shop that is splited to seekers perks, and hiders perks with amazing perks inside, such as, disguise selector, disguise detector, disguise changer, insta solid, throwable tnt, speed effect, and more coming
Special blocks shop
Karma shop
Players can increase/decrease their chance of becoming a hider, and purchasable chances are all customizable!
Auto-join sign (A sign that finds the best available arena and let the player join)
A small api for other developers
Display player rank, coins, exp in chat in any format you like
Make the block behind a join sign change color depending on the arena state
Force start/stop arenas
Reset a specific player stats or just reset every one! and it doesn't matter if the player is offline, the plugin will lookup the database for their name in that case
Cool scoreboards! with epic timers
Automatically give coins every few seconds to players
Enough for now, you see your self

And done!, maybe an extra that you wanna add a join sign? and even set the global lobby? :3

Now for bungee mode servers:
Its the same as before, make some arenas and set the global lobby, and just set BungeeMode.enabled to true in config and reload, arenas will act as maps! please note that the plugin would only be in your game server, it will NEVER be on your hub, if you want to join the game server using a sign or something, you should use TeleportSigns or any other plugin.

To allow players to disguise as mobs, click the spoiler below!
Spoiler: Tutorial


Leader board signs:
Line 1 - [has]
Line 2 - top
Line 3 - Rank (Rank is basically the target you looking for! if you wanna show the top player the rank would be 1, second player would be 2, simple, you can do any rank

To display top heads above signs, simply add a skull above it

Please note that to get the best performance, safety of stats resetting, and assure that top signs work, use MYSQL

This plugin requires you to have IDisguise or Libs Disguises, and since Libs Disguises needs ProtocolLibs, you will need that as well.

If you do not want to use IDisguise, here are some working combinations of Libs Disguises and ProtocolLib

Otherwise, if you have higher than 1.7.9, get the plugins version thats for you from here

There is a list of Invisible blocks that you should not have in your arena / Blocks shop (I believe that Libs Disguises is the cause of this)
Known so far
1 - Chest
2 - Ender_Chest
3 - Pot
4 - Cauldron
If you know about any, please inform me

Thanks to @Zaino60 for testing the plugin

Im sorry for any grammar mistakes! im not english.

API:
To access the api, you have to use HideAndSeek.api

afterwards, you can use two methods as of now, getTopPlayers(int amount) and getPlayerData(Player p);